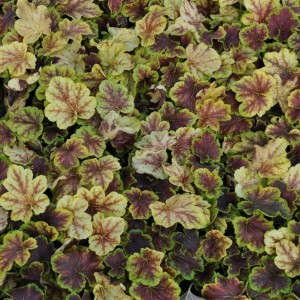 Heucherella is the perennial plant from the family of  Saxifragaceae, received by Heuchera and Tiarella's crossing, or Tiarella. As well as heychera, heycherella lives mainly in mountain districts of North America. The first hybrid species of this plant was created in France in the XX century and heycherella was called Heucherella x tiarelloides, that blossoms fine pink inflorescences and in a flash submits beauty of the leaves. Now besides Heucherella x tiarelloides there is also heycherella white (Heucherella x alba) differing in white flowers. Heycherella has the thick roots located close to a surface, the medium-sized, trimmed, dense and slightly roundish leaves of yellow, green, red, silvery coloring, often with any drawing. Leaves keep the attractive view from early spring to the frosts and under snow leave in the same shape. The bush of a plant has a sphere form. If Heycherella's leaves absorbed generally Heychera's lines, inflorescences, on the contrary, are similar only to Tiarella's inflorescences – remind the hand bells collected in the huge-flowering clustery inflorescences acting in all the beauty in June-July. Thanks to that Heycherella combines the best lines of plants primogenitors, it wins the increasing popularity every year.