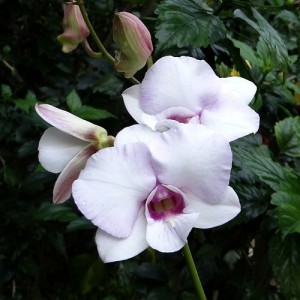 Dendrobium is a genus of evergreen and deciduous perennial herbaceous plants of the orchid family Orchidaceae.

The name of the genus is translated from the Greek as "living on a tree" and it is not surprising that many of roughly 1,100 species described in this genus from 1799 to date, are epiphytes. There are also lithophytes.

The area of distribution includes the western and eastern Himalayas (Nepal and Bhutan, as well as the Indian states of Sikkim and Assam), Bangladesh and Myanmar (former Burma), and other countries in the Southeast Asia, China, and Australia, as well as a myriad of small and large islands (Oceania, Japan, the Philippines, New Guinea, and New Zealand) in between the two latter countries. Dendrobiums can be found in tropical forests on the plains, at the foothills and in the mountains, where seasonal changes are noticeable, which explains a clear dormancy period in the annual lifecycle of these plants. Since almost all of their natural habitats are located in low latitudes close to the equator, they need 12 hours of light a day for good growth.

All known species of the genus Dendrobium are listed in Appendix II to CITES Convention currently ratified by 169 states. The Convention entered into force on July 1, 1975 and aims to ensure that international trade in wild animal and plant species does not threaten their survival. After 1975, none of the species protected under CITES Convention has gone extinct.

The following species are grown indoors:
- Dendrobium nobile, a large deciduous orchid blooming from January to March.
- Dendrobium phalaenopsis, also known as Dendrobium bigibbum and Dendrobium papilionaceusbecame an official flower emblem of the Australian state of Queensland in 1959.
- Their numerous hybrids or greges as they are referred to by orchid experts. Greges are often much brighter and showy.

The maximum height is 60 centimetres.

The Secrets to Successfully Growing Dendrobium

Dendrobium x hybridum is considered to be most suitable for indoor cultivation. It loves light but needs protection from the sun on very hot days.

When the plant is growing actively in the spring and summer, it needs thorough watering. In the winter, watering should be moderate. Let the soil remain almost dry. However, make sure air humidity is high. Always keep it at 60% by placing the pot on a tray with water or wet pebbles.

Dendrobium also loves warmth. The temperature during dormancy (October to February) should not fall below 16 ° C and the best temperatures are 20-22 ° C. Make sure the summer temperatures are 22-25 ° C. Some sources recommend trying out uniform warm temperatures throughout the year without any dormancy period. However in theory, the plant still needs dormancy to blossom.

In the period of active growth, budding, and flowering, feed the plant once in two weeks using orchid fertilizer. You can also use any compound fertilizer at 1/2 or 1/3 the recommended strength.
Repotting is only needed when the substrate rots through and becomes compacted, the roots begin to get out of the old pot and growth slows down (once in 3 or 4 years). Remember that the new pot should not be too large otherwise Dendrobium will grow poorly. Use acidic (pH = 3.0-5.0) or slightly acidic (pH = 5.0-6.0) soil. You might want to use commercially available orchid-specific potting mix or prepare a mixture of peat moss and fern roots at 1:2, adding charcoal pieces. You can replace fern roots by pine bark 0.5 to 1.5 centimetres long, but in this case it is necessary to add dry leaves.

Dendrobium is propagated by dividing the mother plant or layering. Avoid damaging the roots during propagation and repotting.

Dendrobium does not need pruning.

All orchids without exception thrive in well-humidified environment, but too high humidity together with extremely rare airing might result in stem or leaf rot.

Dendrobium does not like drying out or abrupt changes in the conditions.

If the leaves shrivel, turn yellow, and drop, this most likely means that your plant is affected by tobacco whitefly (Bemisia tabaci, very dangerous creatures) or greenhouse whitefly (Trialeurodes vaporariorum). They are tiny (in Europe no more than 3 millimetres) but visible without a magnifying glass. Spray insecticide every 3-4 days to kill whiteflies, their eggs, and larvae.

Yellow or discoloured spots or stripes, holes that gradually appear on the damaged plant tissue, the leaf wither and drop indicates that the plant is affected by thrips (Thysanoptera, with bladder-like sacs on the legs that enable them to cling to surfaces). Urgently apply insecticides.

Brown or light scales that appear on the leaves is an evidence of scale insects (Diaspididae, with the body covered with a thick scale cover). First, carefully remove scales using a soapy sponge and then apply insecticide.

As you can see, a good care for orchids is simple enough, which is sure to make many beginners happy.