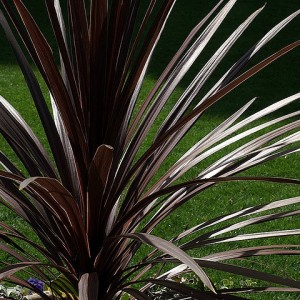 Cordyline is a genus of perennial ornamental deciduous plants. Its botanical classification has changed several times. It was originally treated as belonging to the lily family Liliaceae, then to the agave family Agavaceae, then, taking into account resemblance to Dracena, to Dracaenaceae. In 2003, it was attributed to the family Ruscaceae and now the genus belongs to the family Laxmanniaceae. The situation is similar with its synonyms. Charlwoodia, Cohnia, and Taetsia are placed in the asparagus family Asparagaceae, and before that they were placed in the Agavaceae, Asteliaceae, Laxmanniaceae, and Lomandraceae.

The genus includes 15 species that are native to tropical and subtropical regions of Asia, Australia, America, and Africa. It includes fairly large trees, such as:

- Cordyline terminalis is 2-3 metres tall, with a thin trunk, simple or slightly branched. The other official name is Cordyline fruticosa, which as if lessens the plant. However, the common name of the "Tree of King" is makes it sound more important.

- Cordyline indivisa grows to 7 meters tall. The trunk is unbranched; the leaves are only 10-12 centimetres wide but 60-150 centimetres long, with orange or red midrib.

- Cordyline stricta is a non-branching tree up to 2.5 metres tall. The lower part of the trunk is usually covered with the remains of dead leaves.

- Cordyline australis grows to 15 metres tall. The trunk is thickened at the bottom; the leaves at the top are gathered into a rigid crown (The silhouette is very similar to a palm, isn't it?) The British call it Cornwall palm, the Isle of Man Palm, Torquay Palm (Cornwall, the Isle of Man, and Torquay are parts of the UK). The famous Captain James Cook (who was actually not eaten by Australian Aborigines but killed in a fight with Hawaiian Aborigines) called it the cabbage tree for some reason.

The genus contains bushes and shrubs rising almost up to an average human height. For indoor cultivation, varieties and cultivars have been selected that do not exceed 60 centimetres, no matter how well you feed them. Be sure that any type of a false palm tree will bring enjoyment to their owners because all these plants are beautiful. (Avoid, however, using leaf gloss. It is better just to mist the plant or wipe with a damp cloth.)

In the flower shops, a mature Cordyline is often mistakenly labelled as Dracaena. To avoid confusion, make sure you know the three distinctive features of Cordyline:

1) Cordyline has perinerved venation while Dracaena has a parallel venation of leaves.

3) Cordyline's leaf is attached to the petiole while Dracaena's leaf completely wraps the stem.

Cordyline's original name is easy to root from the Greek word "kordyle", meaning "club". There is an opinion that the preachers from Europe were amazed by swollen, club-like, fleshy roots in some Cordyline species.

In indoor cultivation, Cordyline grows very slow and rarely blooms but with the proper care, it can live for a very long time.

The Secrets to Successful Growing Cordyline

The care for Cordyline is not a highly complicated task though it requires certain skills.

Cordyline loves bright light but not direct sunlight; place it in the eastern or western exposure window in the summer. If placed in the northern exposure window, it will require supplemental lighting. Artificial light in winter during the resting period from October to February is also good.

Water with settled water at room temperature. Water regularly and, most importantly, moderately, once in 2-3 days in the summer and half as often in the winter. Waterlogged soil will cause the leaf drop. However, overdrying is absolutely unacceptable.

Cordyline needs high air humidity (70-75%). Mist the leaves on both sides daily. Make sure water does not accumulate in the central rosette as it can cause the trunk rot. Water and spray with soft water because hard water causes brown spots and / or white streaks appear on the leaves.

The best temperatures are exactly the same as for Dracaena: 20-23 ° C in the summer and 18-20 ° C in the winter (in any case not less than 12 ° C). As you can see, the plant is heat-loving and sensitive to variation in temperature and drafts, especially in the cold season.

Fertilizing is easy. Feed your plant from March to September two times a month by adding compound mineral fertilizer for foliage plants to water.

Repot a young plant every year and a mature plant once in 2-3 years when rootbound.

Each spring, annual top dressing with fresh soil enriched with seaweed and manure is recommended. For repotting, prepare an equal-parts mixture of loam, peat moss, leaf mold, and coarse river sand. (Some experts believe that it is better to replace peat moss with rotted manure or additional part of leaf mold.) The mixture be low acidic (pH = 5.0-6.0) or neutral (pH = 6.0-7.0). You can add small pieces of charcoal. At the bottom of the pot, put a three-centimeter layer of pebbles or expanded clay to promote drainage.

There are four methods used for propagation:

2) By tip cuttings planted in a propagation case (use growth stimulants and bottom heat). Instead, you can place a cutting into a glass filled with water and add Kornevin. The cutting will root three months later.

3) By 5-10 centimetres long stem cuttings (pieces of the trunk).

Cordyline does not need pruning.

Drop of older lower leaves is a natural process. You can mask the sadly looking bare trunk by planting a young Cordyline in the same pot. Alternatively, you can rejuvenate the old plant by cutting off and rooting its top.

If leaf tips and edges turn brown and dry, or even worse, the leaves turn yellow and drop, there can be three causes: 1) Soil overdried for a long time; 2) Soil waterlogged for a long time; 3) The air too dry (air humidity is 60% or less).If the leaves shrivel and become soft with brown spots, it indicates low temperature (15 ° C) or abrupt variation in temperatures.

Brown spots on leaves may also result from underwatering.

If the leaf edges turn black, the reason is underwatering or draft.

If the plant gets spider mites, aphids, thrips, mealybugs, and scale insects, control the pests by insecticides.