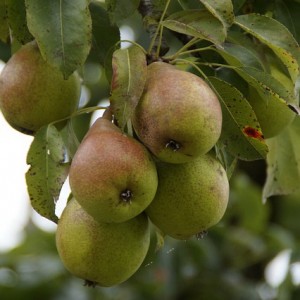 Pyrus is a sort of plants of the family of Rosaceae, which includes more than 60 species of the trees and bushes having fruit and decorative value. The mankind got acquainted with them so long ago that now nobody will undertake to specify the concrete region of the terrestrial land, "triumphal procession" along the planet from where started them. According to estimates of the Ministry of Agriculture of the USA, the largest producer of the pears intended to the use in food it is necessary to consider China now. But in Europe they got popularity long before establishment of the first shy communications with Great Celestial Empire by the Empire. With a considerable share of confidence it is possible to declare that Grusha already in Ancient Greece for at least 10 centuries B.C. was cultivated. A little later certificates on purposeful cultivation by gardeners of the delicious fruits attracting with both taste, and a form, and size reached in the present from Ancient Rome (conducting the hand-written history from 753rd year BC) and from the Persian Empire Akhemenidov (existing from the 550th to the 330th year BC).