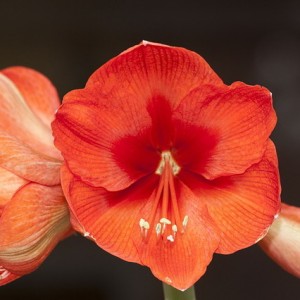 Amaryllis is a genus of bulbous plants in the amaryllis family Amaryllidaceae. The long and complicated history of the genus began in 1737; before that time Amaryllis had been placed to the Lilium and Lilio narcissus families.

As time went on, new species were discovered in the tropical and subtropical regions of America and added to the genus. However, in 1821, the British botanist William Herbert created another genus Hippeastrum and transferred over a dozen American species to it. This resulted in confusion. Some botanists were reluctant to accept novelty; others, without going into the debate, were adding their new discoveries to the genus (Currently, the genus comprises about 80 species); yet others preferred to treat the terms Amaryllis and Hippeastrum as totally synonymous. Only in 1954, a recommendation was given by the International Botanical Congress that the old name was to be applied only to one species of the South African Amaryllis belladonna, all South American species were to be transferred to the genus Hippeastrum and all cultivars and hybrids were to be named Hippeastrum hybrid.

Hence, it is clear that the true Amaryllis is rare in houseplant collections. This is what distinguishes Amaryllis from Hippeastrum:

- Usually, Amaryllis flowers are white, scarlet, and lilac, while colours in Hippeastrum are much more variable, like dark crimson, purple, even green or striped.

- Amaryllis blooms leafless while Hippeastrum develops oblong linear strap-like leaves up to 80 centimetres long during or shortly after flowering.

- Amaryllis produces a dense stalk bearing a cluster of 6 to 12 fragrant flowers.

Hippeastrum has a hollow stalk bearing 2 to 6 flowers that are usually odourless.

Amaryllis as well as Hippeastrum is believed to be one of the best forcing plants as it can be easily forced even by total beginners. Moreover, with modest knowledge and efforts, Amaryllis can be brought into bloom any time of the year just by changing the planting time. Fancy trying?

Remember, a dormancy period is vital for virtually all the Amaryllidaceae. They must be kept in a dark place after each flowering. If there is no dormancy period, the blooms that start to develop inside the bulbs die. At the grower's choice, Amaryllis can go dormant 1 to 3 times per year, each period lasting for 2 to 3 months.

The Secrets to Successfully Growing Amaryllis

Amaryllis loves light and grows well in the south-eastern or south-western exposure window. Amaryllis cannot tolerate direct sunlight, so shield the southern exposure window with a removable screen to shade the plant in the afternoon. The flower stalk leans towards the light. To prevent it, slowly rotate the plant from time to time.

In the dormancy period, stop watering until the flower shoot appears. Then continue moderately watering the plant with warm water. Use bottom watering to keep the bulb's nose dry. During the growing season, make sure to keep the soil moist. Avoid overwatering as all the Amaryllidaceae are very sensitive to waterlogged soil.

The plant is not demanding regarding air humidity and does not require misting. You can wash the leaves using a warm shower or wipe them with a wet soft sponge.

During the dormancy period, keep the mother bulb and bulblets at +10 ° C (the temperature must not exceed 15 ° C). Do not remove wilting foliage until it has become completely dry because it supplies the bulb with nutrients. After the resting period, bring the plant to a room with a temperature of 20 ° C and keep for a few days. Prevent bulbs and roots from overheating, especially prematurely. When the flower stalk appears, place the plant in the window, and when the stalk grows to be about 5-8 centimetres, resume watering with water at a room temperature.

When the stalk grows to 12-15 centimetres, water Amaryllis with a weak (light pink) solution of potassium permanganate and feed with phosphate fertilizer 5-6 days later. Then, over a period of growth and flowering you can use compound mineral fertilizer for flowering plants once every 2 weeks (or once a week at a weaker strength). Stop fertilizing 6-8 weeks before dormancy. Do not use organic fertilizer because it can cause bulb diseases.

The Amaryllidaceae do not like large pots, they may even refuse to bloom. The best space between the bulb and the sides of the pot is 2 to 3 centimetres. Repot the plant when the pot gets too small. Use low-acidity soil (pH = 5.0-6.0). Mix loam, leaf mold, peat, humus, and sand at 4:2:2(1-2):2. Ensure adequate drainage. Plant the bulb with 2/3 of the bulb above the soil line. Be careful not to damage fragile roots as they recover very slowly. For this reason, some sources recommend repotting Amaryllis as less frequently as possible.

Use bulblets for propagation. Separate them from the mother bulb during dormancy. If there are no bulblets, cut the bulb into a few parts so that each part has a fragment of the stem and roots. Make sure to powder the sections with charcoal. Plant in a mix consisting of equal parts of sand and peat and water moderately.

Watering dormant bulbs with hot water (43-45 ° C) is a well-known method to stimulate blooming 20-30 days later. However, forced blooming exhausts the plant, so do not use stimulation more than once in 3 or 4 years.

Amaryllis is not prone to diseases.

More frequent is "red blotch" that causes reddish rust-like spots on the bulb and leaves. Remove the bulb from the pot and clean it from dry and diseased scales. Carefully cut out lesions to healthy tissue with a sharp knife and powder with a mixture of chalk and copper sulphate at 20:1. Next, leave the bulb to dry for a week and plant in the new soil with low humus content. The soil must be pre-steamed and treated with some fungicide. Plant the bulb so that it rises above the soil and only roots and the bottom are in the soil.
Insects that can become a problem include aphids and thrips, causing the leaves to turn yellow and become distorted. Amaryllis can also be plagued by spider mites and scale insects.